Michiru currently attends a girls high school and used to be part of all kinds of clubs on campus but recently started an indie band called Icy tail. She is preparing for her live performances every day. Michiru composes the music in the game by Blessing Software.

Michiru is a tall girl with short and wavy purple hair, dark blue eyes and large breasts. She is in her school uniform most of the time.

She is also often seen wearing casual clothes. At Tomoya Aki's house, she wears a short purple crop top/tank top and a pair of extremely short jean shorts. She is also shown wearing a dress shirt with the first few buttons undone and no pants. At the pool, she wears a purple and white bikini.

Michiru would have been a well-rounded student if not for her poor academic performance. She is fickle and naturally good at anything she does. Tomoya Aki once noted that Michiru had a lot of useless talents.

She is not interested in anything but her band and music, and enjoys playing the guitar. Michiru had a prejudice against otaku culture and wasn't happy about Tomoya being an otaku and tried to get him out of his 'nerd phase' until Tokino Himekawa, Echika Mizuhara and Ranko Morioka told her they were all otaku.

Michiru is a kind and caring girl, but she can also be childish sometimes and she also seems to be naturally cheerful as she is usually seen with a smile on her face. However, she also has shown to be serious and mature.

She doesn't seem to have much modesty and seems to enjoy showing off her body, as she had no problem with Tomoya seeing her only wearing panties and a towel that only barely covered her breasts, and then walked through the house in the same outfit. She also seems to prefer wearing more revealing clothing, as her main casual outfit is a very skimpy crop top and short shorts.

It is hinted that she has feelings for Tomoya, though its not completely clear due to her slightly impassive personality. This was shown when she misunderstood Tomoya when he said he wanted her, meaning that he wanted her to make the game's music, but she interpreted it as wanting her body and love. Yet she didn't reject it, stating instead, "It's not as if I'm not interested, and I doubt it'd be terrible with you. Well, I suppose that wouldn't be too bad." This further proves that she harbors feelings for Tomoya, considering she thought a first time with him wouldn't be so bad, but it's still not confirmed.

Being born on the same day and the same hospital as Tomoya, she has developed a very close relationship with Tomoya and often expresses their understandings for one another physically but neither of them care that they are of the opposite gender. Michiru likes to play around with Tomoya, like she did in the lake. [2] However, it is hinted that Michiru has feelings for Tomoya, but due to her stoic composure, it's not clear if she holds any feelings for him. 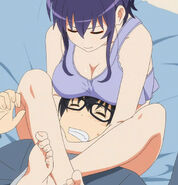 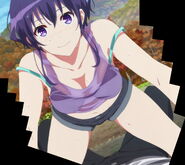 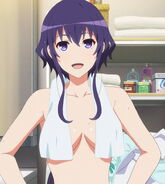 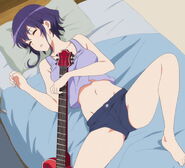 Retrieved from "https://saekano.fandom.com/wiki/Michiru_Hyodo?oldid=8485"
Community content is available under CC-BY-SA unless otherwise noted.