The official website for the PlayStation Vita a visual novel game based on the Saenai Heroine no Sodatekata series announced on Monday that the game is slated for April 30. A limited edition with an original soundtrack CD and a B2-size cloth poster will retail for 8,800 yen (about US$74), a regular edition for 6,800 yen (US$57), and adownload edition for 6,000 yen (US$51). The first copies of all editions will include a download code for an original custom PS Vita theme.

The game, Saenai Heroine no Sodatekata: 〜blessing flowers〜, will utilize Live 2D software, which moves the characters with CGI, but retains their two-dimensional look.

Players take on the role of the protagonist Tomoya Aki (Yoshitsugu Matsuoka) to "raise" a heroine of their choosing for a dojin game. At certain points in the game, the heroines will clash over issues and the player will have to decide which opinion to support. The game's main cast will be the same as the anime's. 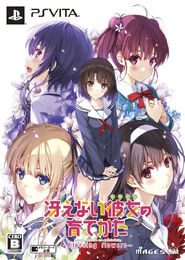 Add a photo to this gallery

Add a photo to this gallery
Retrieved from "https://saekano.fandom.com/wiki/Saenai_Heroine_no_Sodatekata:_%E3%80%9Cblessing_flowers%E3%80%9C?oldid=7936"
Community content is available under CC-BY-SA unless otherwise noted.